The Sisters of Our Lady of Sorrows, invited by the Archbishop Patrick F. Chakaipa the Archdiocese of Harare, arrived in Zimbabwe in 1993. An Italian medical doctor, Marilena Pesaresi, who had been a medical missionary in Zimbabwe for several years and had built a hospital there, wanted to have some sisters to work at a school near the mission hospital. The Archbishop, however, asked the sisters to prepare themselves to assist the priests in pastoral work instead. The vast country has few priests who have to cover large geographical areas and oftentimes need to go into the country farms and villages to serve the people since the people themselves do not have the means to reach their parish churches since they are so far away. The people living in these small areas, called outstations, may not see a priest for 5 or 6 weeks or more. The sisters began going to many of these outstations – doing sacramental preparation for the children and adults, celebrating the Word of God, and bringing the Eucharist to them, especially to the sick and elderly. After a short time, the sisters were offered a house to live in which belonged to the diocese. The convent is located in the town of Chegutu, where the sisters belong to and serve in the local parish church and the 22 outstations associated with the parish.
The sisters also began teaching in the local catholic school – St Francis Secondary School and opened a sewing Centre –“Elizabeth Renzi” Centre for women, teaching them to sew so that they might find employment as seamstresses. As the AIDS epidemic started in many African nations, so was Zimbabwe effected. Many young people and adults died, leaving behind numerous orphaned children. The sisters realized that these children were not going to school since there was no one to pay for their school fees. Many of these children were simply going around begging for food and doing whatever little jobs they could in order to survive. In 2001 the sisters, with the help of various benefactors from both Zimbabwe and Italy started an informal learning Centre (Oratory) for these children. The number of the children grew which led the Sisters to build Our Lady of Sorrows Primary School which was officially opened in 2010. The primary goal of the school was that of educating those orphaned and street children so that they might have a good education and better life. In 2011, the sisters also accepted the administration of an orphanage in the town of Mhondoro. The orphanage, part of a mission which includes a hospital and school, was also built by another missionary doctor from Italy. The orphanage, located near the hospital, was initially built to provide a home for those children who had lost their parents to AIDS or to other tragic events. In addition, the sisters serve the local parish in pastoral ministry, and working with young children and youth of the parish. 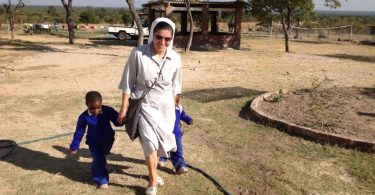 Orfanotrofio per circa 40 bambini 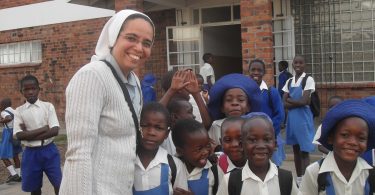